The British Marines can trace their ancestry back to the year 1664, when the Admiral’s Regiment, or the Duke of York and ’s Maritime Regiment of Foot, was raised. British troops had served at sea for many years even before the establishment of the Admirals’ Regiment. During times of war infantry regiments were designated for sea duty to function as Marines, returning to their land role when the war was over.

The British Marines became a permanent establishment in 1755 when an Order in Council approved the raising of 5,000 troops as Marines.  Marines were deemed “necessary for the safety of (the) kingdom and the defense of the possessions of the crown of .”  These new troops were placed under the administration of the Admiralty, divided into 50 companies, and assigned to one of three “Grand Divisions”, to be based in major English ports of , , and . His Majesty's Marines soon demonstrated themselves as an effective fighting force and lived up to their motto, "Per Mare, Per Terram (By Sea, By Land).

Marine detachments serving aboard war ships could be quite large.  The typical 74 gun sip of the line would have had a naval compliment of about 650 men, and the Marine detachment during wartime would have consisted of 80 to 100 men.  While at sea the British Marines served in various capacities.  Marines protected landing parties, stood guard at various posts onboard, and protected the captain and the ships stores from the “notoriously unfaithful seamen.”  Marine detachments were a strong deterrent against mutiny or other problems aboard ship.  They were perceived by the sailors as a representative of the power of the Admiralty.
﻿﻿
British Marines had various assignments during naval engagements.  Some Marines would serve on cannon crews, others would pour small arms fire into the enemy vessel in an attempt to kill or wound its top men and sail trimmers;  still others would throw grenades.  During battle, it was the Marine commanding officer’s duty to be alert to any attempts by the enemy to board the ship.  If such a situation should occur, the Marines were to form up with fixed bayonets and repel boards.

In 1774, the HMS Asia, , and Boynes, carrying 460 British Marines were dispatched to to reinforce Major General Thomas Gage’s army.  Their commander, Major John Pitcairn, drilled and nurtured them into a first class unit, and in May of 1775, an additional detachment of around 700 Marines joined the 460 marines already in to form the 1st and 2nd Battalion of Marines.  Both battalions were organized along conventional army lines, complete with grenadiers and light infantry companies.  The Marines soon took part in the battles of , , Breed’s and , where Major Pitcairn was killed.

When the British Army evacuated in 1776, many Marines grumbled about their return to fleet duty.  Some Marines were reassigned to naval ships, but others continue to see action through the American Revolution, especially in the coastal raiding that took place.

Eleven hundred Marines served with General Howe on in 1776.  In 1777 Marines were also present with the occupying British forces of , and helped capture an American frigate in the .  The city of was captured with the help of two companies of Marines. In 1779 a small contingent of Marines successfully defended in against a much larger force of 3,000 American troops. That same year Marines helped the British Army break the American and French siege of .
British Marines were scattered throughout during the American Revolution. They were present for various actions at , , , , Martha’s Vineyard, , , and the .  A detachment of Marines served in the Fusilier Redoubt at , where Lord Cornwallis said of them that they… “maintained that post with uncommon gallantry.”

His Majesty's Marines participated in the Tea Party Festival in Chestertown, Maryland.         We spoke with members of the ... 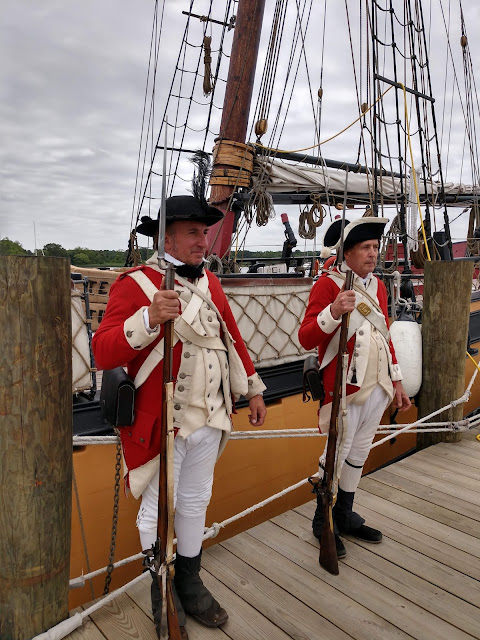 The British Marines can trace their ancestry back to the year 1664, when the Admiral’s Regiment, or the Duke of York and Albany’s Maritime Regiment of Foot, was raised. We welcome your visit!

Take time to read about our history and contact us with any questions you may have about the British Marines in the American Revolution and our impression.

Interested in joining our reenacting unit? We would welcome you!

Love History? Interested the Revolutionary War time period? Intrigued by Tall Ships? Want to learn how to fire a musket?

Don't just watch history, LIVE IT, with the Marines.

Portrait of an Officer of the Battalion Company of Marines 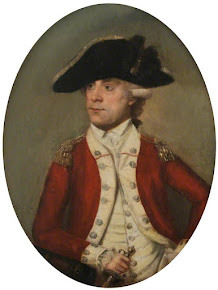 by Francis Alleyne, 1780-85, Portrait Courtesy of the Royal Marines Museum 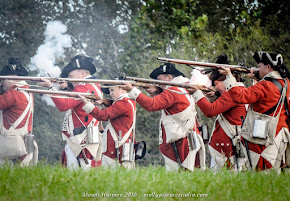 British Marines Today
Our group is a small, elite band of re-enactors with emphasis on unit camaraderie. Unlike some units that often have a couple events a month, we select only a handful of, with an emphasis on battle, living history, and naval oriented events. With this in mind, our group has set out to depict the soldiers of a battalion company of British Marines as they would have appeared in Boston in 1775. With high standards of authenticity, the members of the group are equipped with all the clothing, accoutrements, and equipment that would have been necessary for the British Marine of the American Revolution to project a “solider-like appearance” while he was serving on land. Our unit belongs to the British Brigade, and the Naval and Marine Living History Association, both national re-enactment organizations. 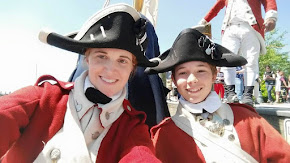 Title Painting is the moonlight Battle off Cape St Vincent, 16 January 1780 by Francis Holman. It shows the Santo Domingo exploding with Rodney's flagship Sandwich in the foreground.

Per Mare Per Terram